February 11, 2017
Hamlette at Hamlette's Soliloquy is hosting I Love Austen Week this week - a week dedicated to all things Jane Austen! Be sure to check out the festivities here if you feel so inclined. Here are my answers to the week's tag. 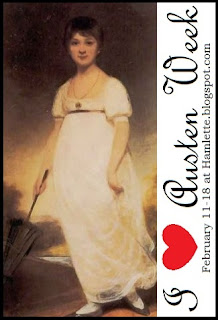 1.  Which did you experience first, a Jane Austen book or a movie based on one?
My first proper experience with Jane Austen was the 2005 Pride & Prejudice film. I didn't know much about the story beforehand and wasn't quite sure what to expect, but I LOVED it. So I quickly started searching out other film adaptations, and of course the books themselves. I think I had seen at least one film version of each book before reading it.

2.  What is your favourite Austen book?
Until a few days ago I would have said Sense & Sensibility, but I've recently started rereading Pride & Prejudice and suspect that it is about to take over. There are just so many good bits that I'd forgotten!
3.  Favourite heroine?  Why do you like her best?
This is quite a hard question! I think Elinor, Anne and Jane are the ones I would most like to know in real life. But I like all of them (except maybe Emma, but I like her character arc through the story).
4.  Favourite hero?  Why do you like him best?
I really like Colonel Brandon (especially Alan Rickman's version). He's just a really nice guy :) Although again, I find it difficult to pick a favourite.
5.  Do you have a favourite film adaptation of Austen's work?
My favourite Austen film adaptation (and possibly my overall favourite film) is the 1995 version of Sense & Sensibility. I basically just love everything about it. I also really like the Kate Beckinsale Emma, and both versions of Pride & Prejudice (controversial I know). (I wrote about my thoughts on different adaptations here.)
6.  Have your Austen tastes changed over the years?  (Did you start out liking one story best, but now like another better?  Did you think she was boring at first, then changed your mind?  Etc.)
Well, my actual first experience with Jane Austen was watching the first two hours of Emma at a friend's house, and I actually found it quite boring. However a few months later I watched P&P and decided that she was definitely not boring. Since then, though, my opinions have not changed materially, although possible I've come to appreciate different things about her stories than when I was initially introduced to them. [I do like Emma now (although it's not one of my favourite of her books, I really like the Kate Beckinsale film, although I still haven't seen the 2009 one all the way through), but I think it is a story that improves on acquaintance - I enjoy it more knowing the full story than I did before.]
7.  Do you have any cool Austen-themed things (mugs, t-shirts, etc)?  (Feel free to share photos if you want.)
No, although I do have a very nice boxed set of all of her novels.
8.  If you could ask Jane Austen one question, what would you ask her?
I can't think of anything off the top of my head.
9.  Imagine someone is making a new film of any Jane Austen story you choose, and you get to cast the leads.  What story do you want filmed, and who would you choose to act in it?
I would like someone to make a good, accurate version of Mansfield Park. I'm not sure about casting though - I don't think I know enough actors to make an informed decision.

10.  Share up to five favourite Jane Austen quotations!
"It is a truth universally acknowledged, that a single man in possession of a good fortune must be in want of a wife." - Pride & Prejudice (such a good opening line; indeed the whole first chapter of P&P is just so good)

"I cannot make speeches, Emma. If I loved you less, I might be able to talk about it more." - Emma
"We all know him to be a proud, unpleasant sort of man; but this would be nothing if you really liked him." - Pride & Prejudice

"People always live for ever when there is any annuity to be paid them." - Sense & Sensibility

"Oh!" cried Marianne, "with what transporting sensations have I formerly seen them fall! How have I delighted, as I walked, to see them driven in showers about me by the wind! What feelings have they, the season, the air altogether inspired! Now there is no one to regard them. They are seen only as a nuisance, swept hastily off, and driven as much as possible from the sight."
"It is not every one," said Elinor, "who has your passion for dead leaves."
- Sense & Sensibility

Popular posts from this blog

Journey to Jo'burg by Beverley Naidoo

July 15, 2018
Journey to Jo'burg tells the story of two children, Naledi and Tiro. When their baby sister becomes very ill, the children decide that they must go to fetch their mother, working in Johannesburg, even if they have to walk all the way there. The book was written in 1985, when apartheid was still in force in South Africa. One of the consequences of this was that many adults were forced to work a long way away from where their children lived, in jobs such as domestic service and mining. The movements of black people were controlled, who had to get permission to live in a certain city, so it wasn't easy to move around or go back home. Naledi and Tiro and their sister, Dinea, live with their aunt and grandmother and have always accepted that this is the way things are; however much they might miss their mother (and their father, who worked in the mines, but has died previous to the beginning of the story), she has to go away and work so that she can send them money f
Post a Comment
Read more

Book Review: The Hound of the Baskervilles by Arthur Conan Doyle

May 29, 2016
This was my Classics Club Spin book, which I was a few days late in finishing. I'm not quite sure what to say about this book. I didn't have very strong feelings about it either way - I enjoyed it, but I didn't love it, and it's such a well-known story that I'm sure everything I could say about it has been said before many times.   I found the story itself to be very compelling; there were certainly enough twists and turns to keep the story interesting. I didn't guess the solution until fairly near the end (and then only partially). The writing style was very straightforward, conveying just enough information to tell the story and build atmosphere, without giving any unnecessary details; which is in keeping with Watson's character who is the narrator of the story. This is different to many other books that I have read, which I found quite refreshing. It's pretty short too (despite the amount of time it took me to read it).   I don&#
Post a Comment
Read more

October 31, 2017
I haven't done a monthly recap post for a while, but I haven't posted much lately so I thought I'd do a summary of what I've read this month.     Firstly, I finally finished Lord of the Rings! I think it's been round about a year, perhaps just over, since I first picked up The Fellowship of the Ring. I tend to be very slow about reading long books - I need to take breaks to read other things in the middle - but I didn't quite expect to take so long to finish. I did enjoy it, and am partly tempted to start over again with FOTR, since it feels like an age since I read that. At any rate, I can now say that I have read it. I made some progress with Mount TBR this month; I'm still hopelessly behind my goal of 24 books, but I did get a few off: The Return of the King (as mentioned above), Scarlet by Marissa Meyer, and Forged in the Fire by Ann Turnbull. Scarlet was a disappointment - despite having really enjoyed Cinder (last year), I found this a bi
5 comments
Read more